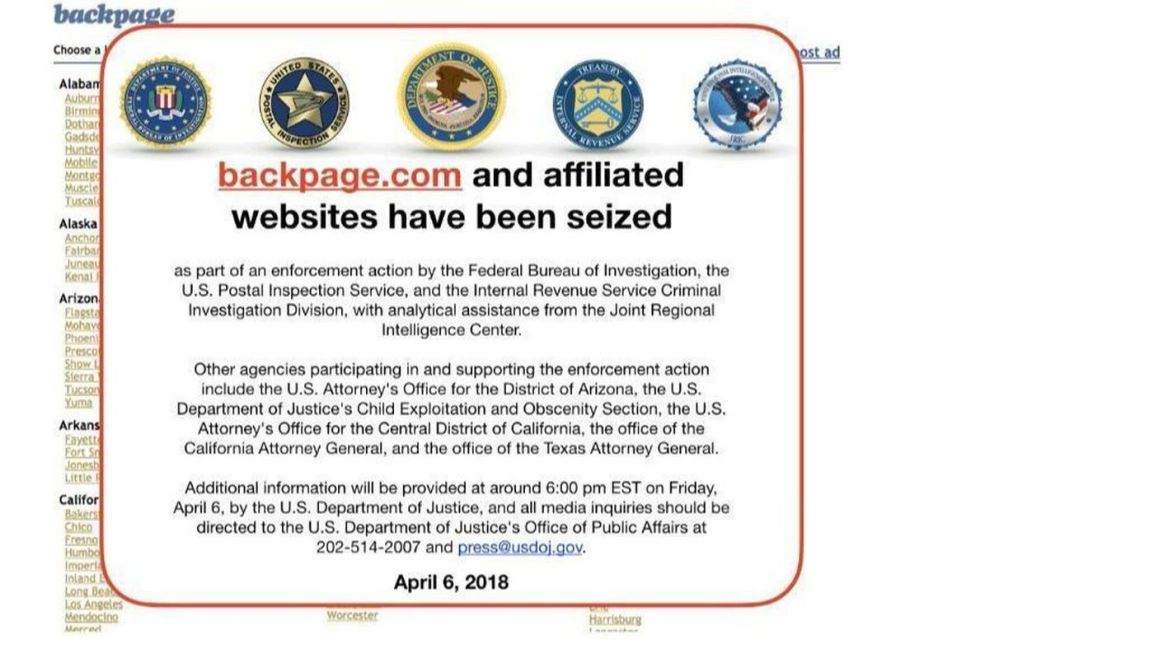 Seven people have been indicted on 93 counts of several different crimes related to the classifieds website, Backpage.com. The crimes include money laundering and running a website to facilitate prostitution.   The FBI confirmed Friday that agents raided the Sedona home of Michael Lacey, the founder of Backpage.com.

The website has been seized and shut down by the FBI.  The FBI seized the website because it was allegedly being used to facilitate crime. The FBI has done this before with other sex trafficking websites and online pharmacies.

There are 17 victims named in the documents who are both adults and children who say they were forced into sex trafficking.   The charges were filed in Arizona because the website was founded and is maintained here and it’s also where Backpage.com’s servers are located.  The Department of Justice (DOJ) says almost every single sex trafficking case involves online ads, mostly from Backpage.com.

According to the DOJ, the biggest issue with these websites is that it facilitates sex trafficking for people who would have been to sheepish to pursue sex on the streets, especially to look for children.

There have been previous cases against Backpage.com that were thrown out because to Communications Decency Act, despite its name, granted complete immunity to vitual pimps like Backpage.  The DOJ says the site has earned $500 million in revenue from prostitution since it was created.

A report released by a U.S. Senate subcommittee in early 2017 stated that the National Center for Missing and Exploited Children‘s data indicates that 73 percent of the child-trafficking reports it receives were related to Backpage.com.  Site executives say they are protected by the Communications Decency Act which regulates pornographic material on the internet. Executives argue that the law states internet publishers cannot be held liable for content created by third parties.  But investigators say the site lost that protection when they alerted posters to key terms related to child sex trafficking. Investigators found proof of these alerts in internal Backpage.com documents.

The site even gave the third party posters a chance to rephrase their ads so they wouldn’t be flagged for child sex trafficking. Some of the terms Backpage.com admins told posters not to use include “Lolita,” young, teenager and even “Amber Alert.”

The site’s CEO, Carl Ferrer was arrested in late 2016 on pimping charges.

Ferrer and other executives went before a Senate investigation committee in 2017 where they all invoked the fifth amendment. The charges against Ferrer were eventually dismissed.

Backpage has no immunity to protect it from civil suit for the injuries and suffering that it caused.  Klein Frank, P.C. is in the process of filing cases for clients who were minor and who were bought and sold on this malicious website.

Beth Klein is an attorney, leadership trainer and writer. Beth empowers people through the practice of law, seminars and writings. She speaks about kindness, making the world a better place, foreign affairs, technology, treaties, terrorism, and beauty, music, science, and play. In 2018 she is committed to a kinder world, and she "uses her powers for good." View all posts by Beth Klein